Pawnee Buttes a.k.a. "The Wind Tunnel"

Last Thursday, Ashley mentioned that she'd been keeping an eye on the weather and that the weekend looked like it would be a beautiful one to go camping. We checked the weather forecasts again and decided to go for it. Looking over our options, we decided to try Pawnee Buttes, the Colorado icon of the high plains. Camping in the mountains would have been to cold and wet. As we researched about Pawnee Buttes, we noticed that the state high point for Nebraska was only 20 miles away, as well as the state corners where Nebraska, Wyoming, and Colorado all meet. We decided to go and visit them all! 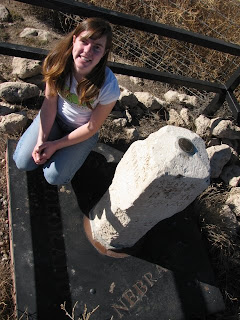 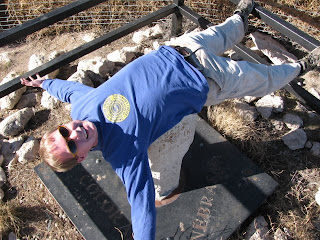 We left about noon, and drove east- going for the corner and high point first. The roads were long and straight and we were mostly the only ones out there. We got about 1/4 of a mile away from the corner, and noticed the road heading there appeared to be a rut going out into a farmer's field. After hesitating for just a moment, we decided to drive down there anyway. We slowly inched our way along the ruts, and about 5 minutes later, the monument came into view. We got out and took some pictures and laughed at how random it was, then hopped back in the car to drive to the high point. 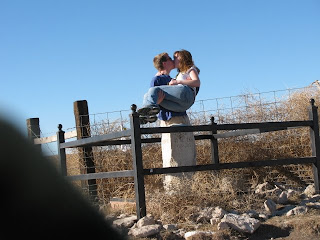 The Nebraska high point is less than half a mile from the state corner, but to get there, we had to drive a big loop around several fields. It's located on private property, but they have allowed public access. As we drove through the field to the high point, it was obvious that we were the only visitors there that day. 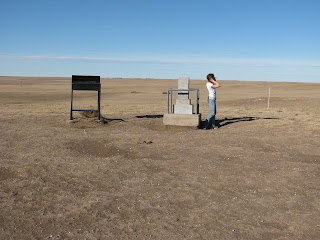 The monument is set on top of a hill that is virtually indistinguishable from the other rolling hills around it. Nonetheless, it is the only one with a monument declaring superiority over the others. We parked the car and climbed the last 100 feet (horizontal, not vertical) to the summit. After posing for more pictures, we hopped back in the car and continued onto our final destination- Pawnee Buttes. 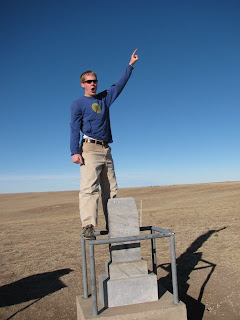 We arrived at Pawnee, found a campsite, set up camp, and went for a hike before dinner. After we got back, we prepared dinner, looked at the stars, and went to bed. It was about 6:30, with a light breeze. About 7:30, the breeze picked up, so I went and took off the rain fly because it was flapping too much. I moved the car to provide a windbreak as well. Anyway, neither helped because I spent the next 6 1/2 hours waking up frequently because of the wind flapping the tent. It sounded like the tent was trying to either take off, or come apart at the seams. A time or two, I knew I could feel a breeze between my toes. 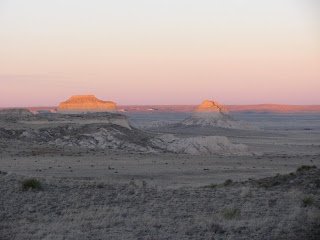 Finally about 2 AM, I had had enough of trying to sleep. This was Pawnee Buttes- not a wind tunnel! We had brought a tent to sleep in, not a kite! What good is trying to sleep when sleep is physically impossible? All the while, Ashley was peacefully slumbering. Obviously she hadn't bought the tent and wasn't worried about it. Anyway, I had had enough. I was awake, and there was no way I was going to get a good night's rest. What's a guy to do at 2 AM when he can't sleep? Fortunately, we came prepared on this trip. I crawled out from under the many blankets, put on two pairs of pants, 3 shirts, a fleece vest, a jacket, my hat, gloves, wool socks, hiking boots, and my headlamp. I gave Ash a kiss on the cheek and said "I'm going for a hike". I gave her the option of coming with me- we could go on a hike, then watch the sunrise. After learning the time, she declined in favor of the warm blankets. She still wasn't perturbed by the tent flapping in the hurricane! 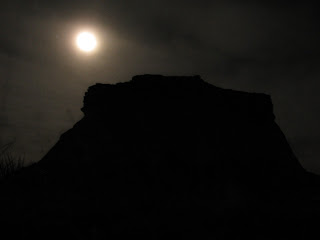 Anyway, I got up and filled up my Camelbak, then set off. Three and a half hours later, I made it back to the tent. I'd hiked down to the buttes, around both of them, and other places that I'm sure I couldn't follow again. There's nothing quite like hiking when you can't sleep! I got back at 5:30, took off several of the clothing items I'd layered with, and fell asleep for an hour. Sweet bliss!
(The picture here has been removed by Ashley.)

I woke up again. This time it was 6:30- twelve hours after the whole trying to sleep business had started. There was a faint red line above the horizon to the east. I nudged Ashley awake. I was going hiking again and this time she was coming with me. 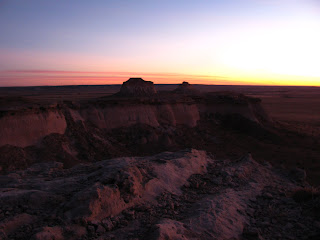 We made it to an overlook about 15 minutes before the sun came up. We watched the sky ripen into brilliant shades of red, orange, pink, yellow, and purple, and then fade again as the sun rose. 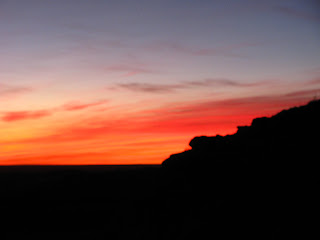 The wind was still roaring, but we'd made it through the night. The sunrise was beautiful, and Saturday had come.
Nearest City: Briggsdale, CO or Grover, CO
GPS Coordinates:
Time Needed: overnight
Difficulty: Easy
Kid Friendly: No. Not anybody friendly!
Additional Info:
Posted by Ben at 10:12 AM