Canoe Building: Fairing the inside of the Hull 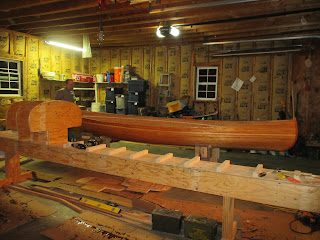 After the epoxy has cured on the outside of the hull for a few days, it's time to pull the canoe off of the forms.  It's a milestone event!  You've been working so hard on the canoe and finally you get to see what it looks like upright.  I built two sling stands out of scrap wood and carpet scraps to hold the canoe once I removed it from the forms.  The instructions are in Canoecraft.  One change I would make though is 26" high stands are a little short for working on the inside of the canoe.  I'd put the vertical dimension of the stands at 30-32 inches. 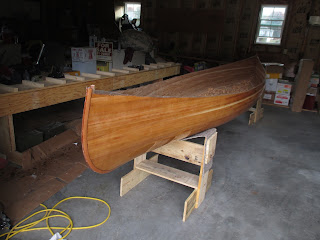 So there it is- the first upright view of the canoe.  It's an exciting moment and it makes you want to bring it out and put it in the water, but there's more to be done before that happens.  At this point you can remove the forms from the strongback and take the strongback down.  I gave mine to a friend that is going to build a canoe of his own. 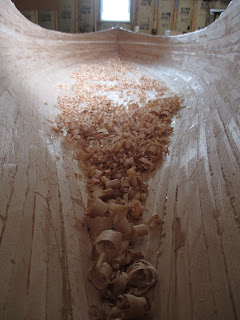 Once the canoe is off of the strongback and turned over, it's time to fair the inside of the hull.  Run your hand over the inside.  You'll feel lots of ridges and valleys in the cedar, as well as bumps of dried glue.  You'll be able to use a plane to smooth some of it out.  Then graduate to a random orbital sander, as well as sandpaper wrapped around a water bottle for the tight curves.  It will take an hour or two (or three), but it goes pretty fast, and each pass the inside of the hull will be a little smoother.

Don't work in one place for too long- regularly move down the hull so you don't sand all the way through it.  Use whatever works for you.  A plane works best for the heavy ridges, but 80 grit on a random orbital sander moves at a good clip too.  Then graduate to 120 grit.  For a final sanding, wipe down the inside of the hull with a wet rag to raise the grain of the cedar, then sand it again with the 120 grit.  It will be nice and smooth and ready for the next step of fiberglassing the inside of the hull.