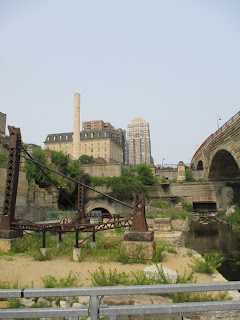 Headed south.  We left Duluth and went to the Twin Cities.  We wanted to go to where Minneapolis was born, so we visited the Mill Ruins Park.  The park preserves the ruins of several flour mills on the south bank of the Mississippi River in downtown Minneapolis.  The ruins are impressive to see, especially with the stone arch bridge and portions of the Minneapolis skyline visible. 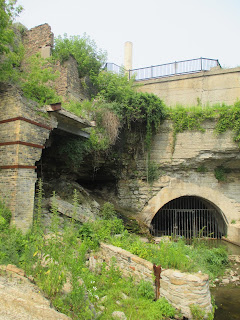 The city sprang up around St. Anthony falls, a large waterfall on the Mississippi River.  The millers knew they could use the power generated by the falling water to power their grinding wheels.  Due to the the mills, the transportation the river offers, and the proximity to large fields of grain, Minneapolis quickly rose to prominence in the field of cereal grain processing.  Numerous well known companies began there, from General Mills, Malt-o-meal, Pillsbury, and others. 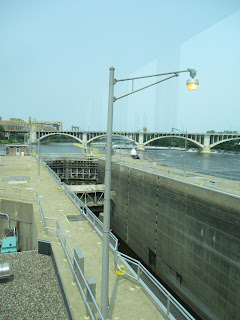 Adjacent to the park is a lock used to allow ships and barges up above St Anthony Falls.  We took the opportunity of taking a tour.  The lock is controlled by the Army Corps of Engineers, but is currently not operating.  It is indefinitely closed to prevent the spread of asian carp. 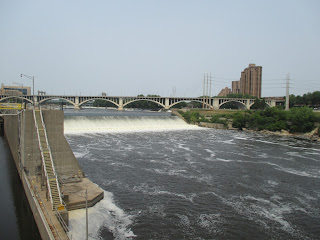 While touring the lock, we learned about the great St Anthony Falls collapse.  There is a stretch of hard bedrock that extends under the Mississippi River, forming St Anthony Falls.  It's only about 1000 feet wide.  In 1869, a tunnel that was bored through the bedrock to create more power collapsed, and nearly collapsed the waterfall into a gnarly rapid.  It took several years to stabilize the waterfall, and now the falls are completely encased in concrete to prevent the possibility of collapse.  If they would have collapsed, Minneapolis would have never grown up to be the big city it is.