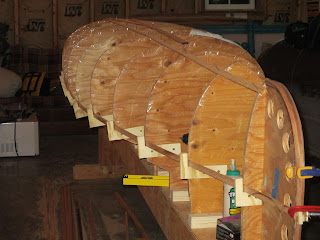 Late August (August 22 to be exact) rolled around and I was ready to put on the first strip. This is important for two reasons: 1, I'm actually starting on the canoe itself.  and 2.  The first strip is the one that every other strip is based off of, so it's important to make it level. 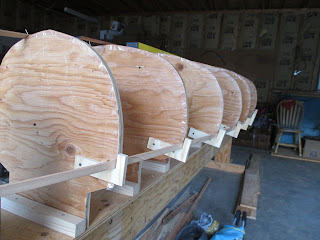 Really it's not hard.  I drilled a small hole in the strip where the center form (#8 for me) is, then placed a small nail in the hole and hammered it into the form. I've learned the lesson of pre-drilling on the canoe.  Pre-drill everything!  When in doubt, pre-drill it!  Then I worked my way down the strip toward the stems, attaching another nail or two on each strip on the #6 and #10 molds.  Toward the stem the strip droops slightly from the pull of gravity, but that's ok.  I clamped it at the stems, then going back to the center, affixed the cleats at each mold.  I found pretty quickly that positioning the cleat, then clamping it in place, allowed me to put two screws through the cleat and attach it firmly to the mold. I then would remove the clamp and go to the next mold and repeat. 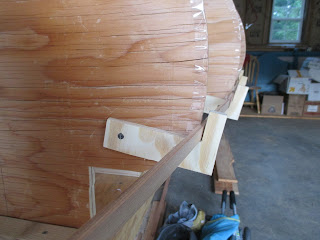 Here's an up-close view of the cleat with the strip in place.  After I got one side done, I repeated the process on the other side, the only difference is that on the second side I used a level to make sure the two sides were parallel with each other.  I finished by gluing the strips to the stems and clamping them in place to dry. A little sand paper attached to the pads on the clamp help give it a little grip since the gripping surface at the stems is angled.

So that was it- the first strips of many!  My canoe building is finally happening!