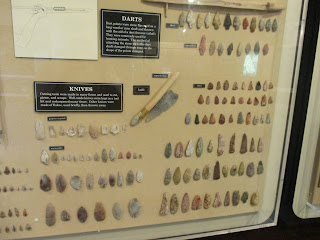 Toltec Mounds.  Sounds like a fascinating place.  I couldn't help but place it on our trip itinerary.  We drove over to Toltec Mounds, located a short drive southeast of Little Rock, as one of our furthest stops from home on or Arkansas trip.  Essentially, after our stop here, we would more or less be headed toward home.  We got there on a hot morning on Wednesday and surprisingly did not have the park to ourselves.  A school group and several others were also visiting.  The museum was our first stop.  It's small, but it's a great place to learn about Toltec Mounds.  Most of the site has not been excavated, although much of the non-mound areas have been plowed and planted with crops by the farmer who used to own the area.  There's a great collection of artifacts on display.  I also enjoyed the exhibits about the archeoastronomy and the measurements and relationship between the different mounds. 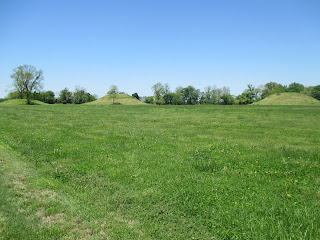 After the visitor center, we went for a hike out around the biggest mounds.  There used to be several other mounds as well as a short wall around the site which had been built by the mound builders.  Many of the mounds were only 2-3 feet tall and hard to discern from the surrounding vegetation.  The three biggest mounds prominently overlook the remainder of the site.   There's a network of trails and visitors are encouraged to use them and to not go explore on their own.  Imagine what it would be like to build one of those mounds, one basket of dirt at a time.  It definitely sounds time and labor intensive to me! 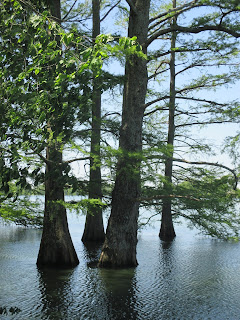 At the back side of the mounds in Mound Lake.  There's a small boardwalk that goes along part of the edge of the lake which was the favorite part of the hike for the kids.  They liked the trees growing in the water, as well as trying to spy the different turtles either swimming in the water or sunning themselves on logs.

Toltec Mounds is a pretty cool little park.  It is very neat to visit if you like learning about prehistoric cultures and the Indians that used to live here.  It whetted my appetite to learn more about the mound building.