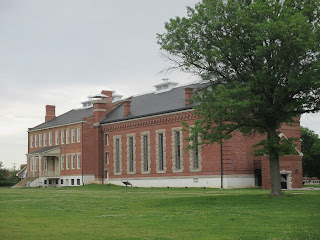 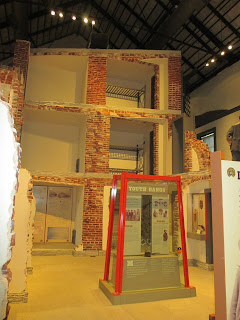 The historic site does a great job of explaining the relations between keeping the peace in indian territory, and the tensions that arose with issues of jurisdiction, or who legally had the right to try lawbreakers in a court of law.  Indian tribes are recognized by the government as sovereign nations, meaning they have the right to make and enforce their own laws.  The problems arose when lawbreakers tried to use the different borders to their own advantage, and escape the consequences of their actions by crossing a political border between Arkansas and indian territory.  The museum inside has two main focal points of its exhibits: law breakers, and law enforcers.  The building used to be a prison, and courtroom, among countless other uses.  Some exhibits talk about famous prisoners or life in prison, others talk about frontier justice and Judge Parker, the most famous judge at Fort Smith. 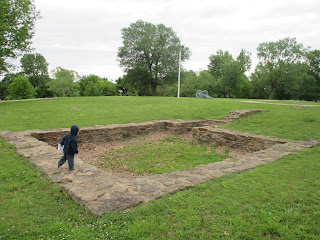 West of the main part of the historic site, there's a some trails that tie into  the city of Fort Smith's trails.  One of the trails goes and shows the ruins of the original Fort Smith, located on a small rise at the junction of the Arkansas and Poteau Rivers. 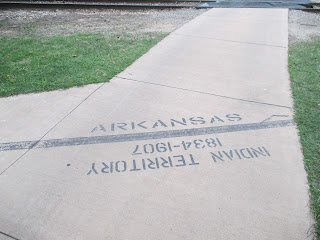 We also liked the line painted on the path that showed the old boundary between Arkansas and Indian Territory.  The boundary has been slightly amended since 1907, so now Oklahoma is a little further west then the Fort Smith Historic Site, but it's still interesting to see where the border once was.