All alone at the Marais Des Cygnes Massacre Site 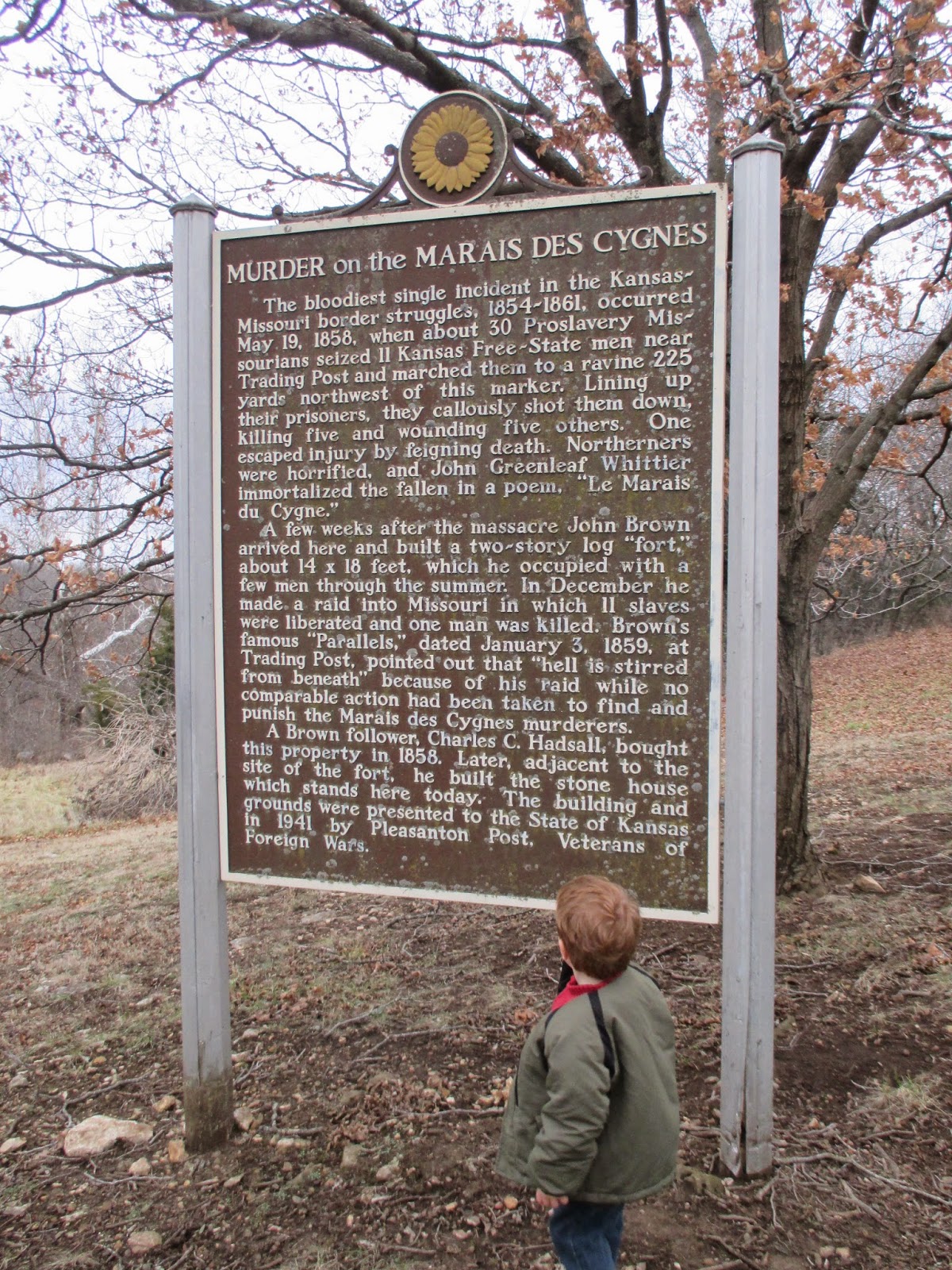 We took a short trip down south just after Christmas.  It looked like a nice weekend, so we loaded up and headed out.  We drove out of Kansas City and toward Fort Scott.  We didn't have any particular schedule to keep, but we had several sites to visit along the way.  Our first stop was at the Marais Des Cygnes Massacre Site. 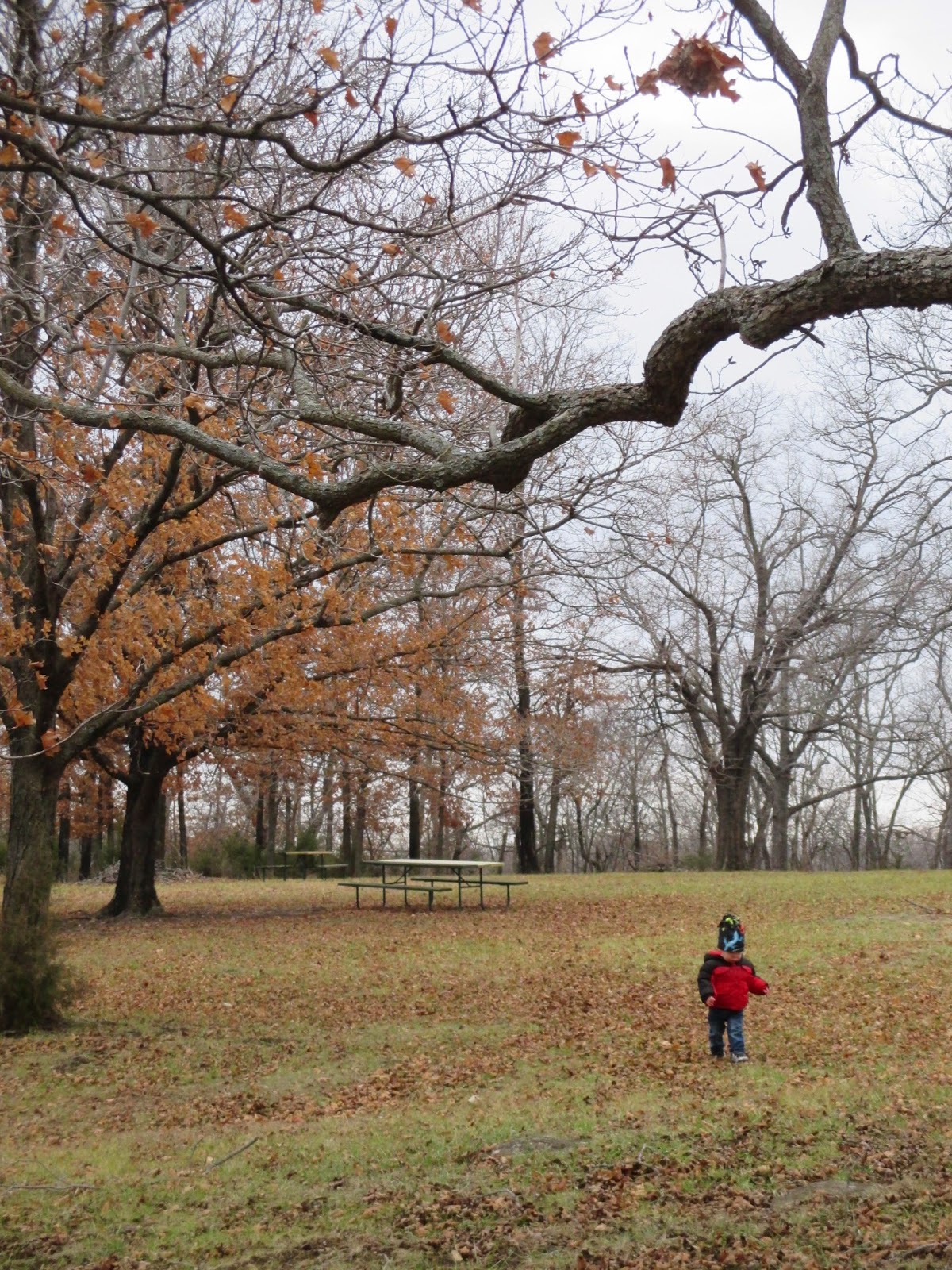 The site is located a few miles east of Highway 69, about an hour south of Kansas City.   It's only about 1/4 mile from Missouri, which plays a factor in the story of the Marais Des Cygnes Massacre.  It's relatively undeveloped for being a State Historic Site, with a few picnic tables, an old historic "cabin" that's apparently always closed, and a short driving tour with signs to read telling about the massacre.  There are numerous pecan trees, but all of the pecans we cracked open had been eaten by bugs.  A few blackberry bushes pop up along abandoned stone fences.  It's literally a place that you'll most likely have to yourself if you visit. 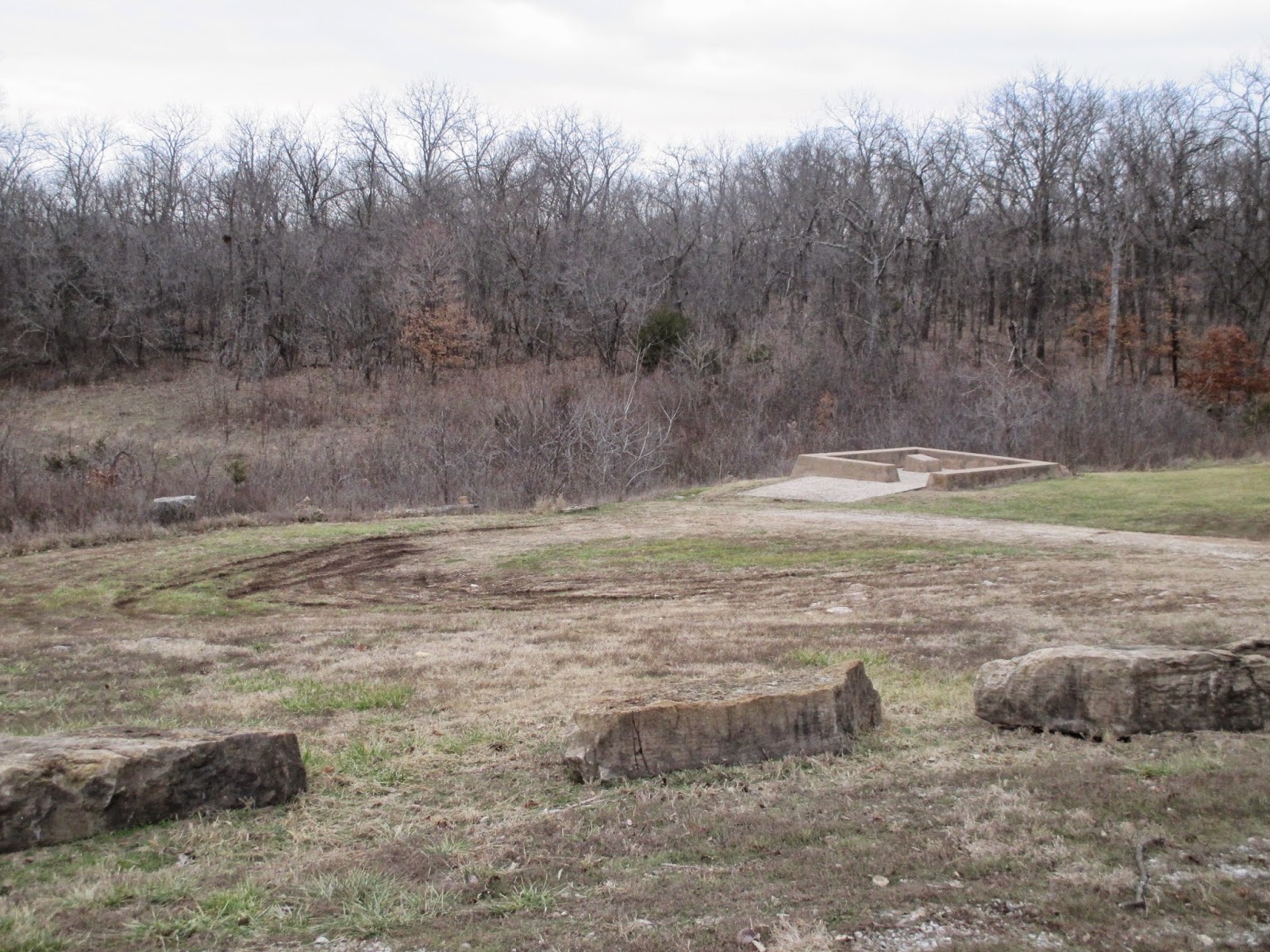 The Marais Des Cygnes Massacre was part of the "Bleeding Kansas" struggle prior to the Civil War.  Bleeding Kansas was essentially a political struggle from 1854-1861, centered primarily on whether Kansas would permit or oppose slavery.  The tendency was to oppose it, but citizens of pro-slavery Missouri did their best rail against anyone against slavery, and sometimes the efforts fell to violence.
The Marais Des Cygnes Massacre was one of the last large violent outbreaks of the Bleeding Kansas era.  On May 19, 1858, a group of 30 or so men from Missouri crossed the border into then Kansas Territory and rounded up 11 unarmed men and turned back east.  Most of them knew the leader of the group, Charles Hamilton, personally.  Hamilton and his ruffians led them into a small hollow, then opened fire.  Five of the men were killed, five were injured, and another escaped physical harm by playing dead.  The only man who was prosecuted for the crime was caught and hanged in 1863. 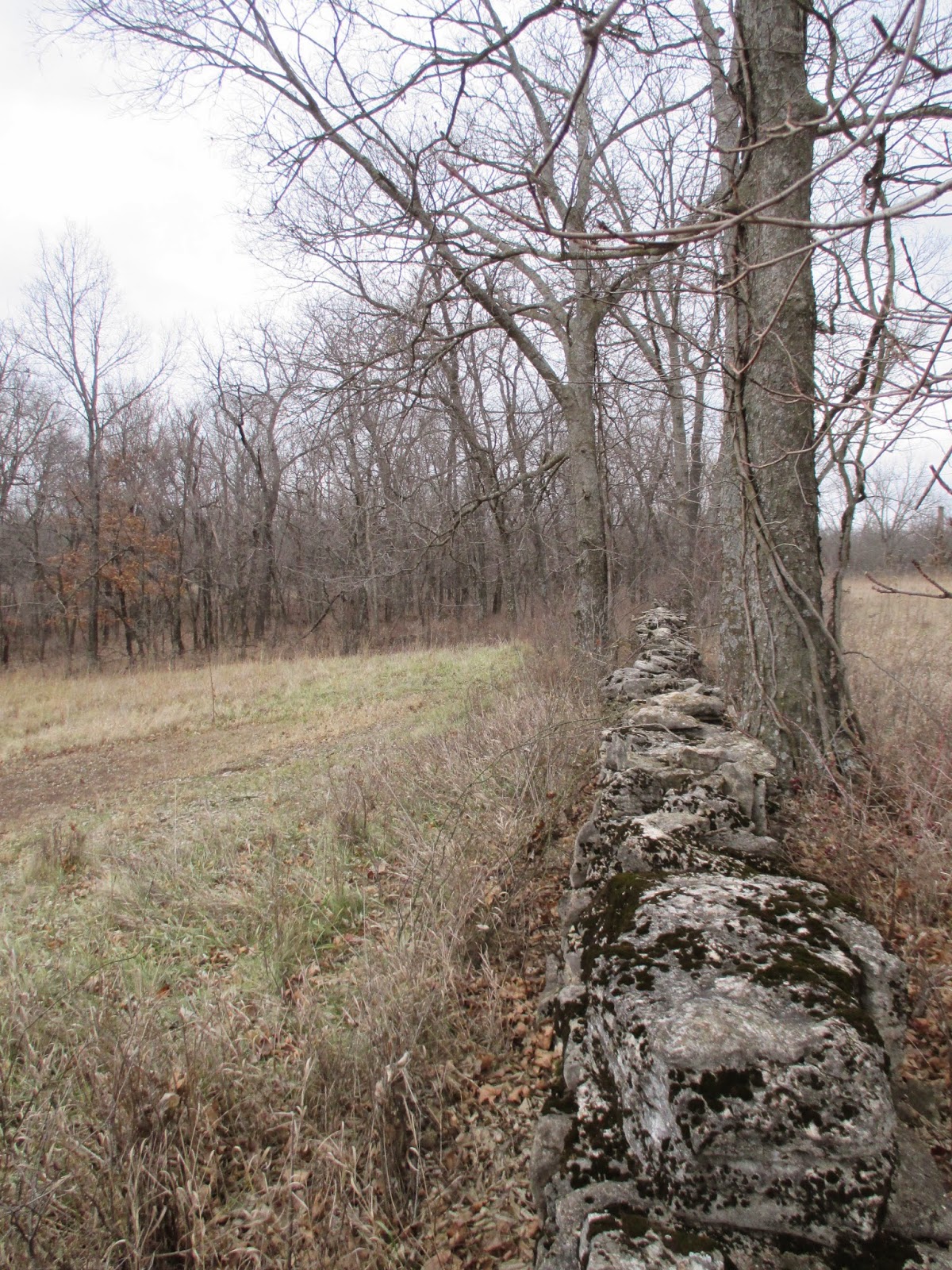 We wandered the area for a while. There's a prominent spot in the ravine where a plaque or statue must have once been attached, but now it's just an empty cement monument base.  We turned to walk back to the car, but got sidetracked with one of the stone fences.  There's lots of limestone in the area, and several fences have been constructed of the stone. 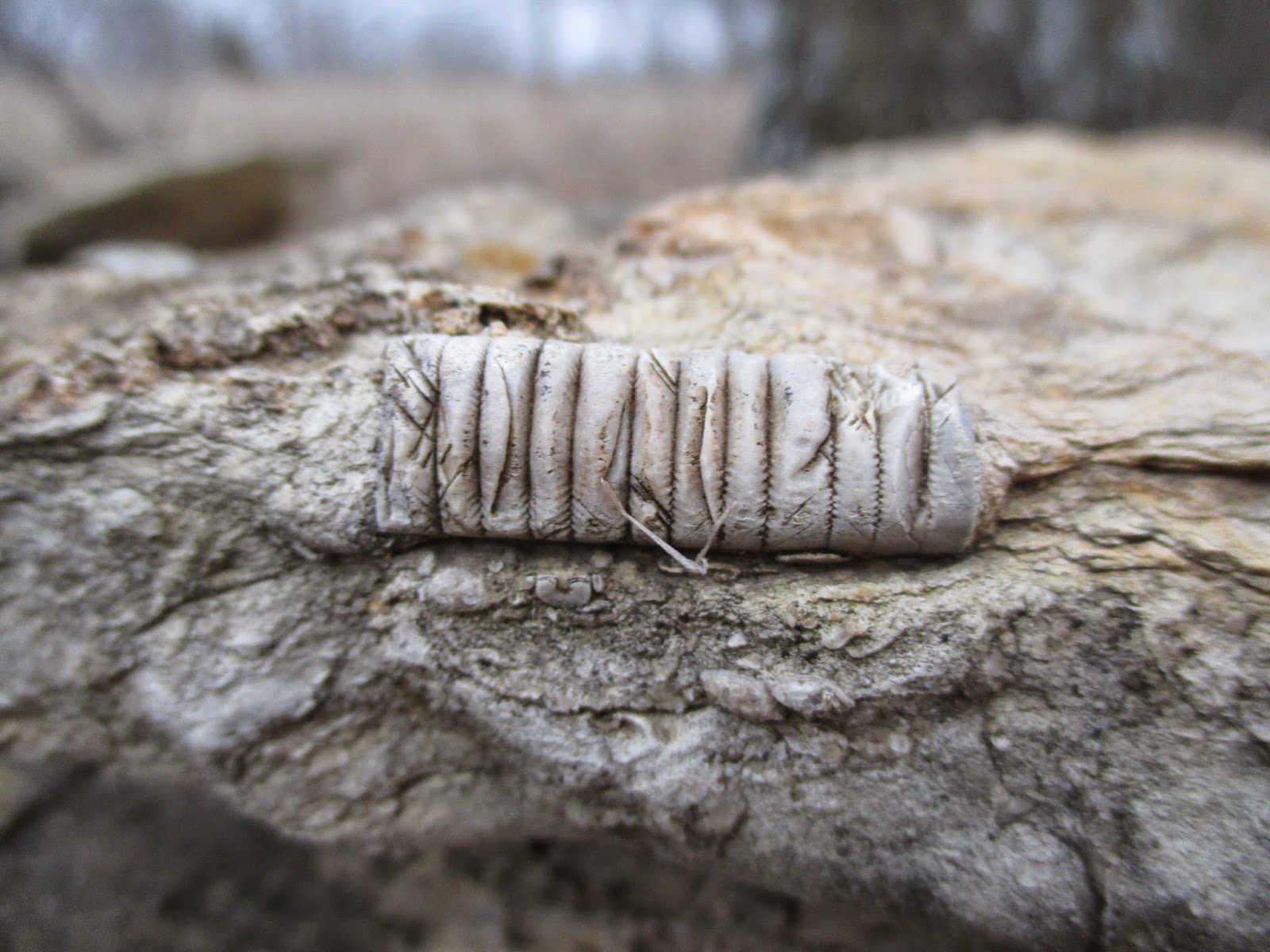 We noticed several fossils in the stones- this a small fossilized piece of crinoid stem.  It's an interesting spot.  We spent probably 45 minutes at the site, reading the signs, wandering under the trees, and swinging on a small rope swing dangling from one of the oaks.  It would be a great spot for a picnic!