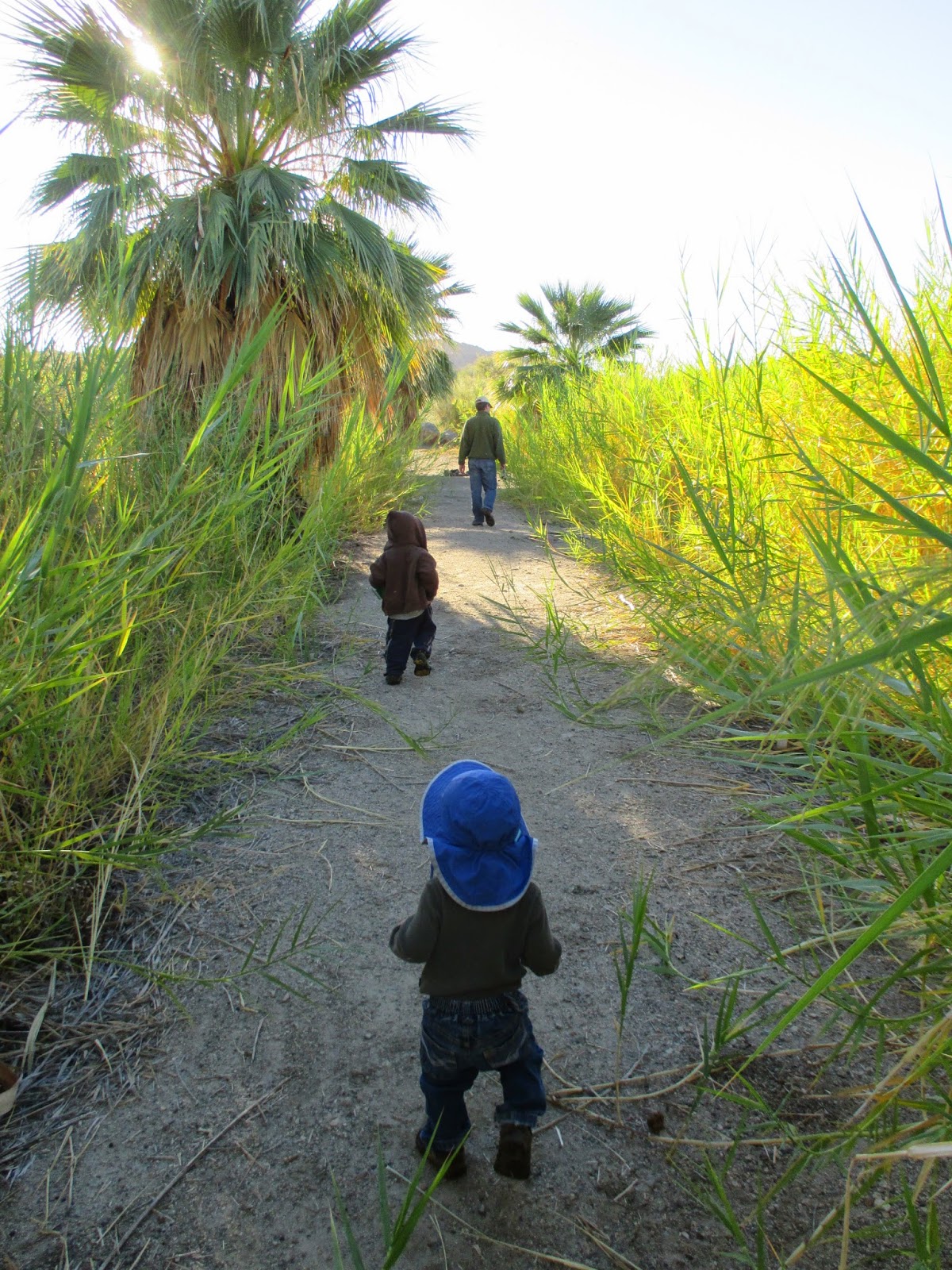 Over the Veterans Day weekend we took off to Yuma.  "Why Yuma?"  or "What's in Yuma?" people would ask us.  Our standard response was "I don't know, we've never been there, so we're just going to see."  But secretly, I had different reasons for going to Yuma.  More on that later. 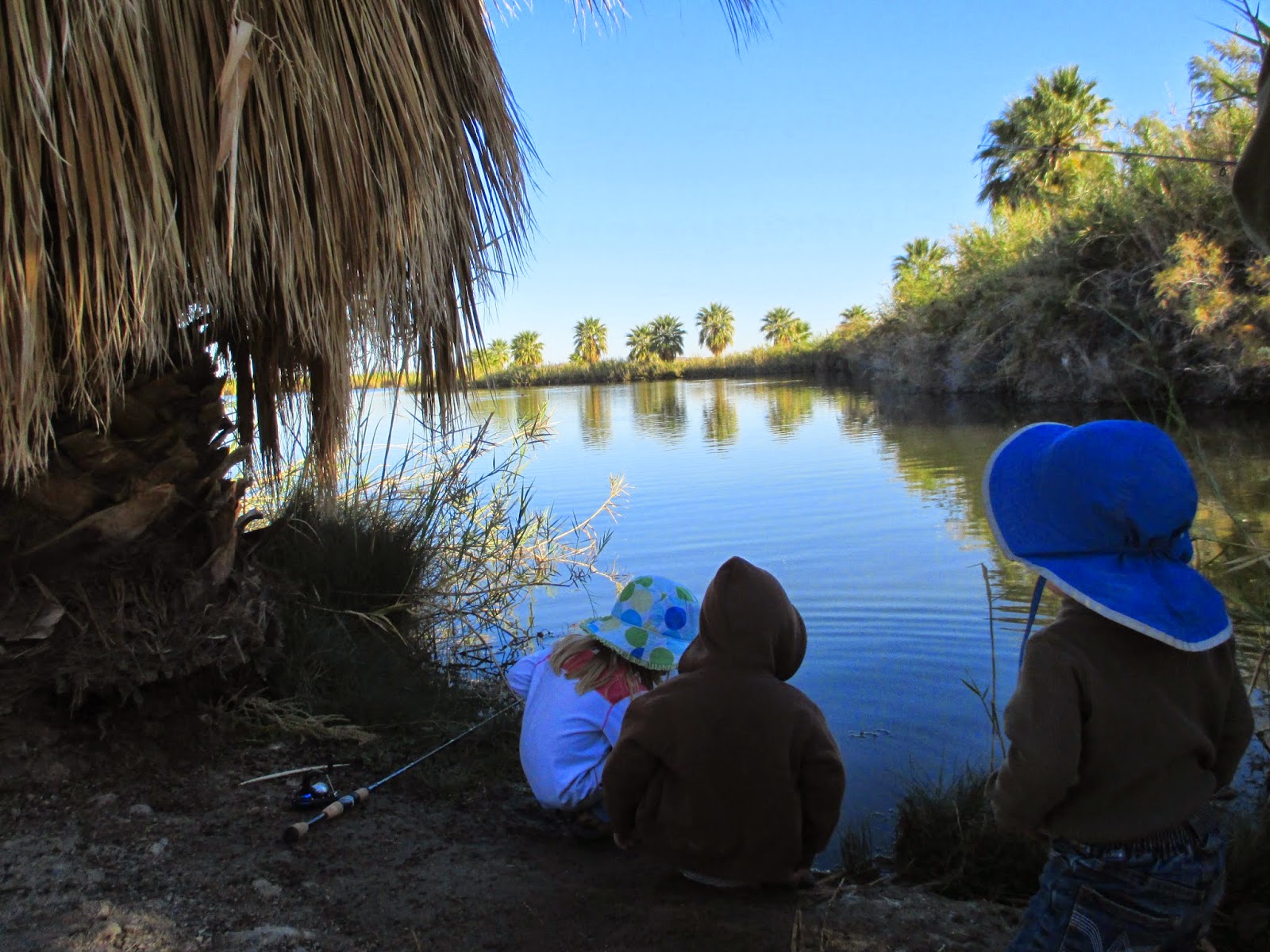 We left Sierra Vista after work on Friday, then drove for 300 miles or so to Yuma. I didn't know exactly where we were going to camp, but knew there were some primitive sites in the vicinity of Mittry Lake, about 10-12 miles north of town.  Sure enough, we found a great little site overlooking Mittry Lake.  In the morning, we got up then went down to the lake to cook breakfast and go fishing.  My wife would say that she cooked breakfast and I went fishing and it would be complete truth.  I remind her occasionally that my first love is fishing, but she's my true love.  She laughs and tells me that her first love is rocks, and that I'm her true love. 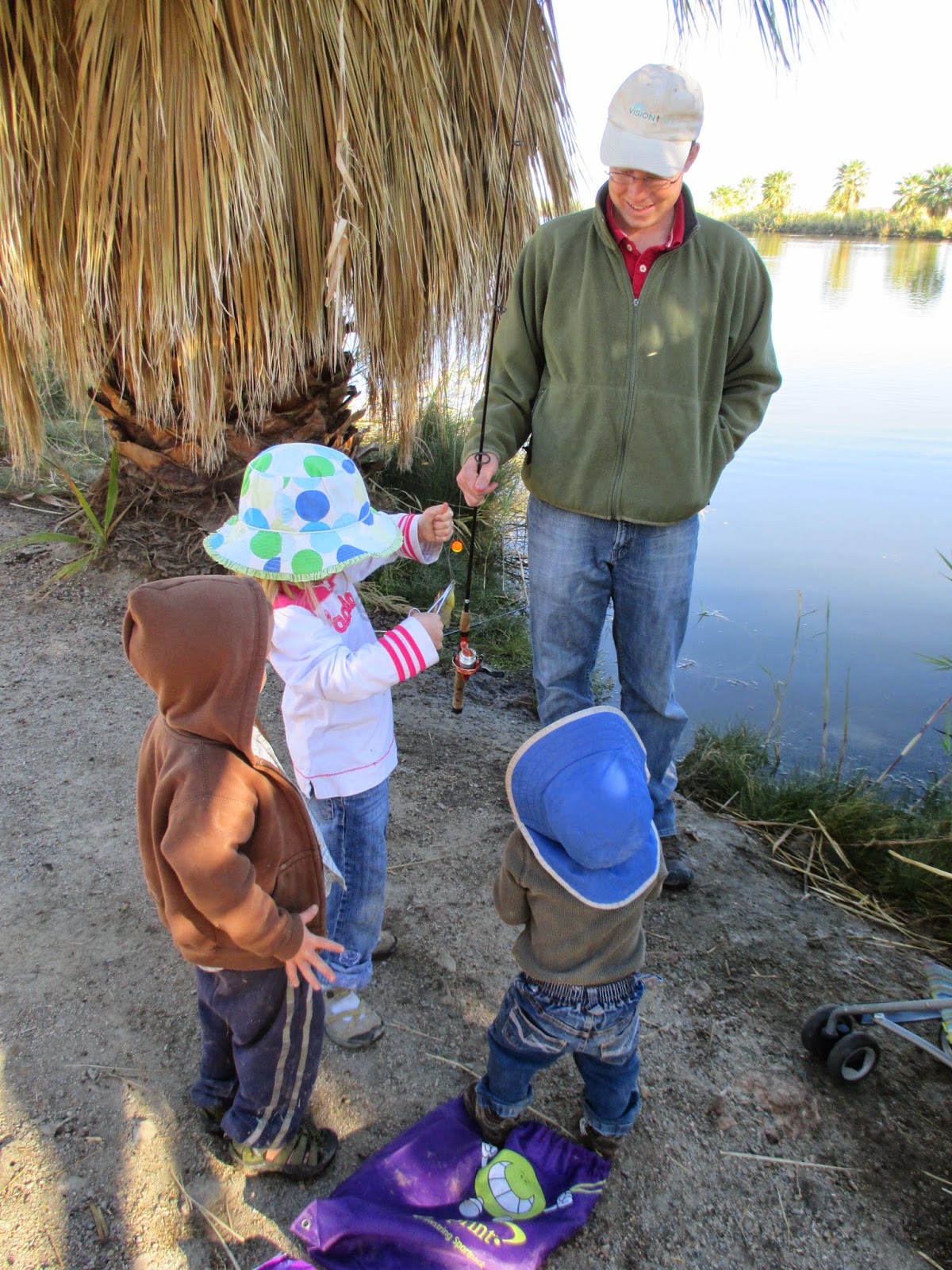 Anyway, we caught a few redear sunfish and other panfish at Mittry Lake.  The kids still like catching more then they like fishing, so they'd watch their poles for 20 seconds then go and dig in the dirt for a while.  After one of the poles really started moving and someone reeled in a 12-14 inch catfish their attention spans got a little longer.   So we fished for a while until the kids were done fishing.  Then we packed up, and went down to the boat ramp, and took a walk.  I've gotta be honest and say it sure was nice to spend some time on the water.  Then we packed up and headed into Yuma to see what was there. 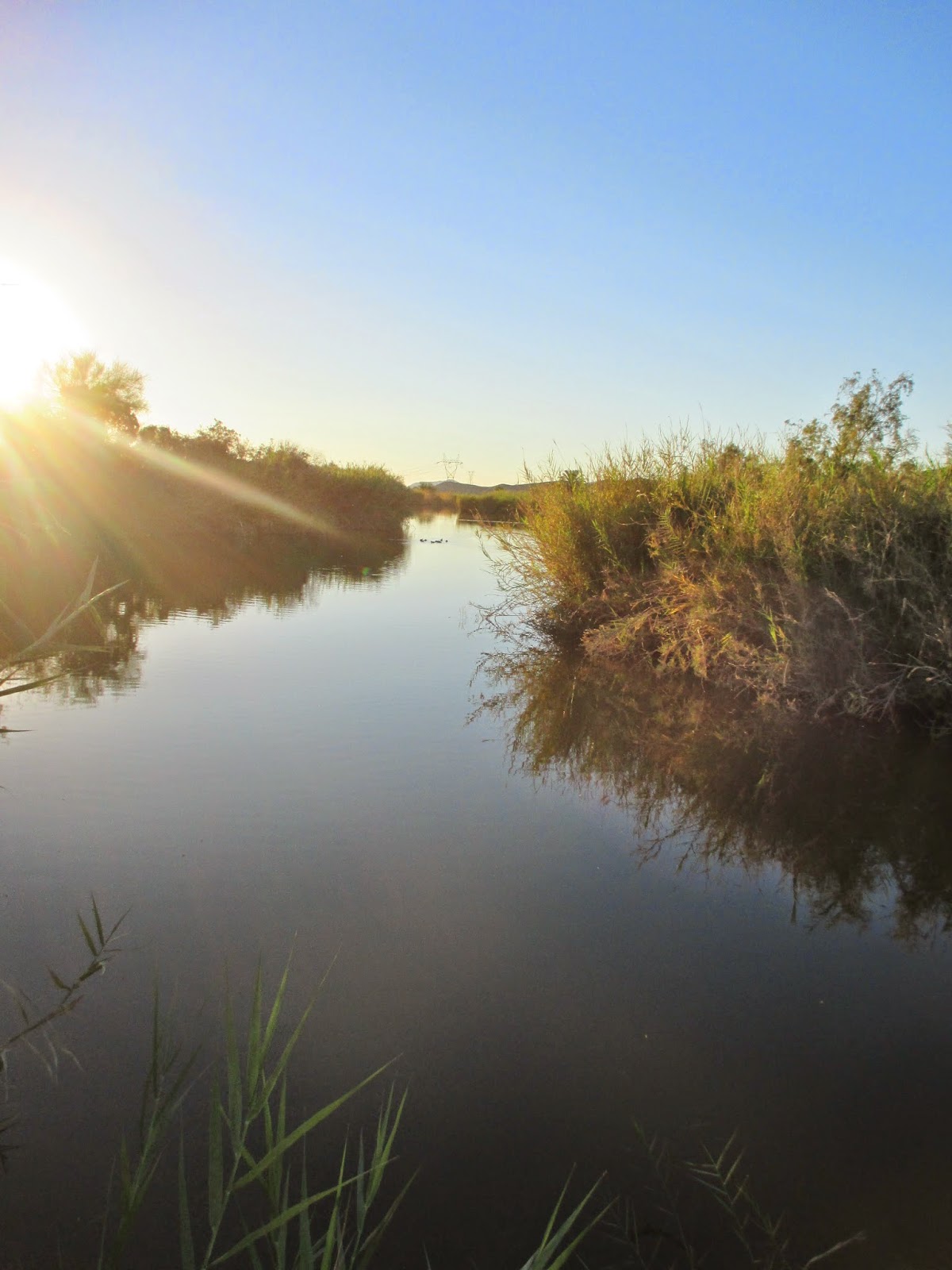 Later in the afternoon, we made it back for some more fishing.  This time we stopped at Betty's Kitchen- a fishing hole along the Colorado River.   I was unsure if the Arizona Fish and Game department counted Mittry Lake as an Inland or Colorado River water, so we decided to try a spot that was definitely a Colorado River fishing hole.  An email returned after we got home from the AZ Fish & Game indicated that Mittry Lake is considered by them to be a Colorado River water, but we didn't know that until we got home.  One of the things I like to do is canvass the State Fishing Records.  A while back, I noticed that Arizona breaks their records into several categories- in addition to the "hook and cook" category, you have the catch & release categories.  Furthermore, Arizona has "inland" and "Colorado River" divisions.  Well, the inland records are all pretty well set, but I noticed that the many of the Colorado River Catch & Release records were unfilled.  So, back to "Why Yuma?"  I think you can probably see where this is going.  My mind put it together like this- All we've got to do is go to the Colorado River and catch something, measure it, take a picture, release it,  and send in the documentation to the Fish & Game Department and we've got a new state record.  Done done and done!  The hardest part is going to be getting to the Colorado River.  I didn't have a hard time convincing myself that it was a good idea to take off for the long weekend. 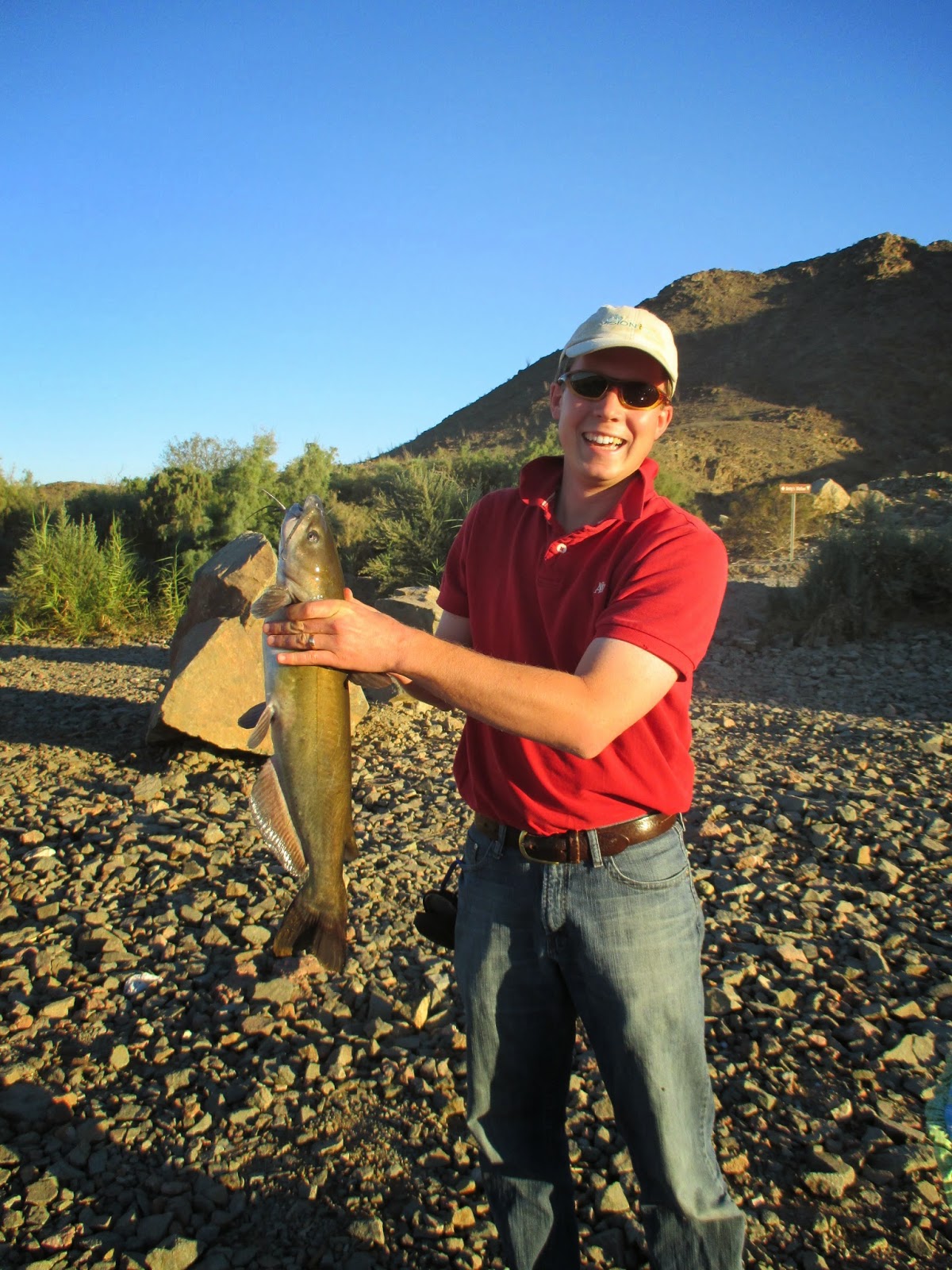 So at Betty's Kitchen, we did a little more fishing.  I first caught a 8 inch largemouth bass.  Unfortunately, that was one of the record categories that was filled.  I'd need another 20 or so inches on that fish to stand a chance.  So, I baited up and cast again.  After letting the bait sit on the bottom for a while, there was a tug on my pole.  I set the hook and fish on!  I called over to my wife and kids who were talking to some other people fishing and they smiled and waved and kept talking.  A couple minutes later, I called them again and they thought that coming over would be a good idea when they saw I was still fighting the fish.  Shortly after that I landed a nice 26" channel catfish.  It was my personal best catfish by a couple inches.  Even better was that the C&R record for channel catfish on the Colorado River was unfilled.  We measured the fish, took a few pictures, then turned it loose.  Mission accomplished!  I filled out the documentation and sent in the paperwork when we got home.  We'll see if I hear anything back about setting the state record. If so, it's gotta be just about the easiest record fish I've ever caught.