Saturday we went out to the Spiral Jetty.  I'd heard about it several times before, but had always heard that the road out there was bad.  Actually, the people at the Golden Spike National Historic Site just down the road don't speak highly about the road to the Spiral Jetty either (Maybe it's just a National Park Service policy to make things sound harder than they actually are).  We had no problems on the drive.  In fact, any low clearance vehicle should have no problem with the road out there when it's in dry conditions.  There were a few washboard sections, but it's a gravel/dirt road that is in great shape.  To get there, go to the Golden Spike NHS, then follow the signs as you drive further west for another 16 miles. 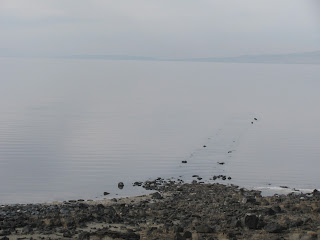 We had the place to ourselves.  The lake was high and we could just make out the shape of the Spiral Jetty under the surface.  A few rocks on the stem were poking out.  I wanted to walk out there, but then I reminded myself that it was February and the water would be freezing cold. 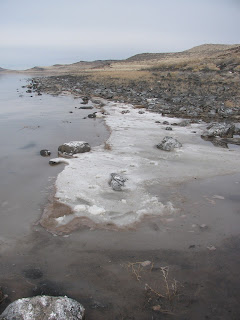 I had fun along the beach instead.  We found a little salt bar that poked into the water.  I say salt bar, because it literally was made up of salt crystals.  See the picture below.  It's awesomely crazy! 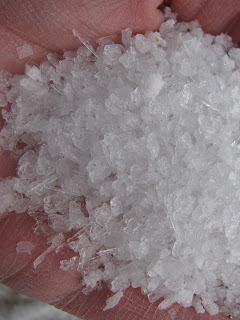 The sand is pretty cool too.  It reminded me of the little balls of dry yeast that you use when making homemade bread.  It's a special kind of sand called oolitic sand.  Basically, instead of forming from rocks that have broken down into little pieces (like most sand), the oolitic sand is formed in the water from dissolved minerals.  The minerals build up around a center made up of brine shrimp poo or something else. 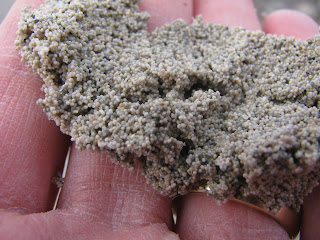 We had a picnic, went on a walk on the beach, and skipped rocks.  It was a relaxing getaway, especially with the kids sleeping in the back for the drive.  I'll have to come back sometime when the water is warmer and go for a swim. 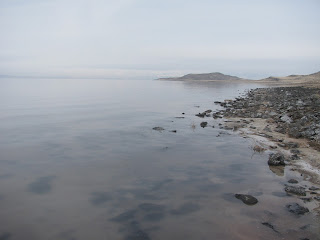