A while back I picked up an small pointer that someone had seen fish in the small stream up a canyon I frequently hike.  Hmm...interesting.  I ran it past a few friends that grew up in the area and they somewhat scoffed at the idea that there were fish up there.  So, I was left with a choice- get out and try to catch fish that may not exist, or don't try to catch fish that may not exist and always wonder if they do. 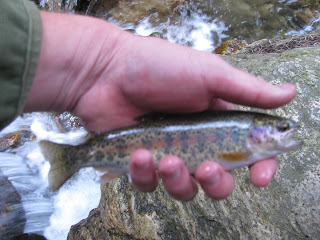 So, I got up early on Saturday morning and set off for a brisk hike.  At the mouth of the canyon the stream can be somewhat seasonal so I just blew by the first mile or so of water.  When I got near the spot where the fish had been seen, I left the trail and approached a likely hole.  A gentle cast put my the jig in a likely spot.  Nothing.  Another cast.  Again nothing.  I thorougly probed the hole, looking for flashes or any indication of possible fish.  Nada.  Maybe these fish were just in someone's imagination.  I decided to get a second opinion at the next hole.  Same result.  Things were not looking good. 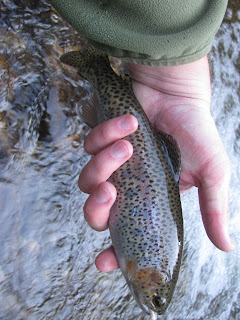 A the third hole contained a better answer in the form of hit and a missed strike.  The next cast provided another strike.  Finally on the 4th cast I had a solid hookup.  MONEY!  I quickly played a beautiful 8 inch wild rainbow into my hand.  I carefully unhooked it and released it back into its watery home.  So there are fish in here!  I always experience a huge thrill when I catch fish out of unlikely spots.  This time was no different. 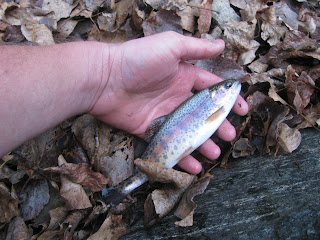 I spent the next hour and a half fishing my way up the creek, occasionally pulling out another small rainbow trout.  As I got further up the canyon, it seemed like there were a few more fish.  I ended up catching 5 or 6 of the beautiful rainbows, all of which were released. Wild rainbows like this are a gem and should have a little protection- especially when they are only a short hike from tens of thousands of people.  Wild trout on a small creek can't sustain a population if there is much of a harvest.  Take a dozen trout out, and the likelihood of the population crashing is very real.  So, if you identify my new secret spot, please- let all the fish go!  The wild ones are much prettier than their cousins raised in a hatchery.  As my time was up, I turned my back and trekked toward home with a smile on my face.