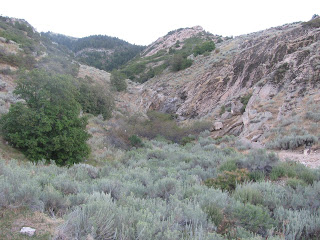 A week or so ago, Spencer Coles of utahcaves.blogspot.com asked me to go check out Garner Cave.  Of course it was one of those offers that you just can't say no to.  Although it's a fairly well-known cave, it's not quite a "gimme" either.  First off, there's knowing where it's at, then there's the steep hike to get there, rattlesnakes (potentially) at the entrance to dodge, and a 15-20 foot exposed climb- all before actually getting to the cave. 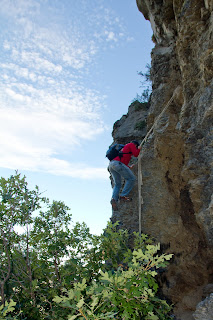 Once you're at the cave though, things get better.  I don't know what it is about caves, but life's always better when you have one you're going to see or are coming away from just having explored one.  Garner Cave was like that.  It's not exactly an expansive cave, or one in pristine condition, but crawling through the mud, dirt, and packrat droppings still put a smile on my face. 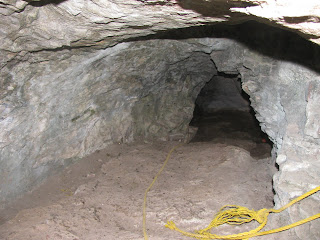 Garner Cave is well known, so we didn't need to use any of the gear we'd brought.  It's well roped, but it's best to be prepared.  The cave began as a small tunnel, then opened up to a corridor we could walk through. 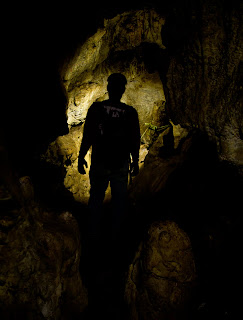 At the end of the corridor, the cave necked down quite a bit and became a vertical crack.  The crack was pretty thin and we had to seek the best way down in the wider spots, while avoiding the squeeze of the narrow ones. 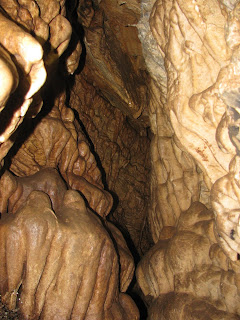 Fortunately, there were ropes in place to offer handholds and support at some of the trickier spots.  The cave is humid and moist, and much of the walls to downclimb were slick with moisture. 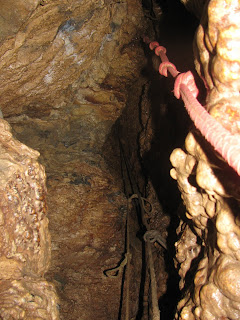 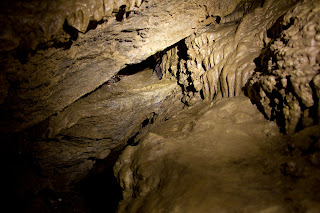 Unfortunately, the vast majority of the cave formations have been broken off or damaged by countless visitors.  The ones in the best condition were small and in the back of inaccessible alcoves. 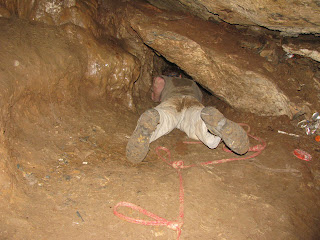 We finally reached the bottom of the downclimb where it opens up into 2 large rooms.  We looked around, then found the smaller hole to climb through to push the cave further. 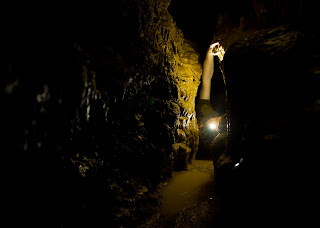 It went for another 20 feet or so before the walls got narrow again.  We squeezed through the mud and water to check around the corner.  On the other side was the "mud room" marking the end of the cave.  We turned around and crawled back through the holes and passages to get back to the big rooms, gathering empty bottles, glow sticks, and used batteries that other low class visitors had left.  Come on people!  Pack out your own junk! 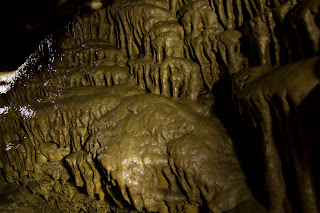 We worked our way up the crack and back out of the cave.  Back into the light.  Back to reality.

Nearest City: North Ogden, UT
Location: N° W°
Time Needed: 3 hours round trip
Difficulty: Moderate
Kid Friendly: Nope
Additional Info:  This cave has some tight spots not recommended for those over about 200 lbs. (or kids or pregnant women for that matter)
Posted by Ben at 4:27 PM