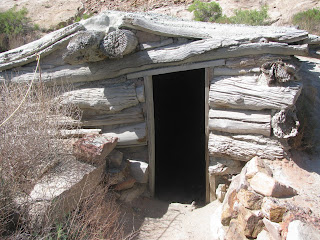 The next stop on our tour of eastern Utah was Arches National Park.  It was at least a dozen years since I had last been to Arches, so it was good to be back.  I do love the redrock of Southern Utah!  The one hike we wanted to do was Delicate Arch.  Since it was Memorial Day weekend, the park was crowded, so we drove straight to the trailhead and found a spot to park.  The lot was mostly full, so we grabbed one of the remaining spots.  It wouldn't be the last experience we'd have with full parking lots on the trip.  Just after the trailhead, there's an old historic cabin just to the north of the trail.  What a place to settle down!  I'd rate it high up there on the scale of beauty, but low on the scale of inhabitability.  If I was the early settler, my summary would probably read something like "Crops burned up. Cattle starved to death. Burning up in the heat. Prayed for rain.  Rain came.  Flood washed everything away.  That's it- I'm moving to Moab." 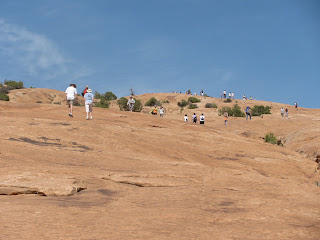 Just before midway on the hike, there's a long slow climb up a slickrock slope.  See how many people you can count in this picture.  Did I mention it was Memorial Day weekend?  It looked like somebody kicked an anthill for all of the commotion there was! 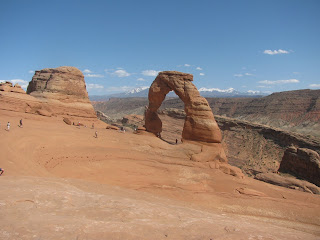 We finally made it to Delicate Arch.  Once again, there were people everywhere.  I found a shady spot then sat down for a drink, to look at the arch, and to watch people.  I also pondered about the arches I saw on the hike that most people disregard.  I saw at least 2, maybe 3 that most people are oblivious to.  Anywhere else, they'd be a destination in and of themselves, but here in the land of 2000+ arches people walk by them without even noticing them. 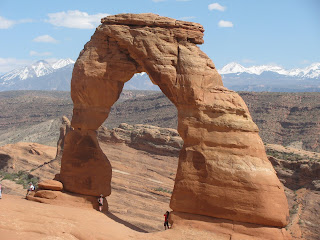 I took a few obligatory pictures. 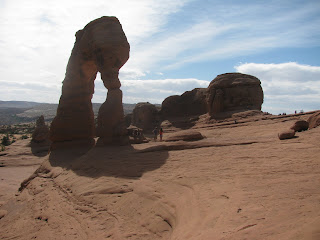 Then I tried to get a few pictures to get a different perspective of Delicate Arch.  Most of these ones didn't turn out so well. 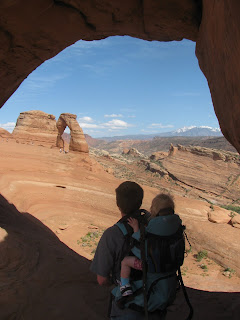 We took one last view of the arch, then headed down the hill. 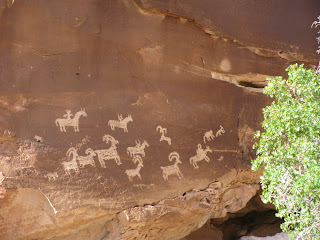 At the end of the hike (or beginning if you're just leaving) there's a small detour near the cabin to some petroglyphs.  We wandered over and took a look.  I think the bighorn sheep petroglyphs look pretty cool!  The man on the horse shows that these ones were made in the Ute era of pictograph making instead of an earlier time.