Last weekend we headed out for a Memorial Day Roadtrip.  Since I usually have Fridays off, we loaded the car and took off after work on Thursday.  We filled up with gas in Springville, took another short break in Price, then headed for our first real stop: the Crystal Geyser. 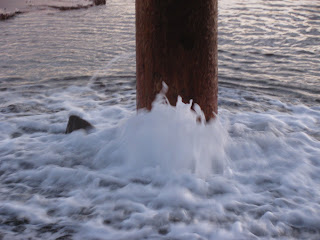 Before the trip, I had assumed that the Crystal Geyser and the Chaffin Geyser were one and the same, but I was wrong.  The Chaffin Geyser is on the west side of the Green River and erupts every 2-4 hours.  The Crystal Geyser is on the east bank of the Green River, and erupts every 8 or 22 hours.  It also happens to be the largest coldwater geyser in the world. 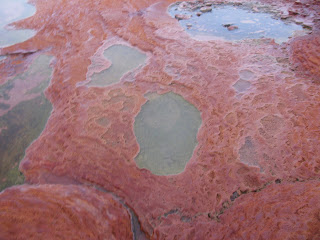 We almost missed the eruption entirely, but got lucky and caught the tail end of it when we pulled up.  There's a pipe sticking out of the ground, and around it was all white and frothy.  Every few minutes some water would shoot 3-8 feet out of the top of the pipe.  It was really amazing! 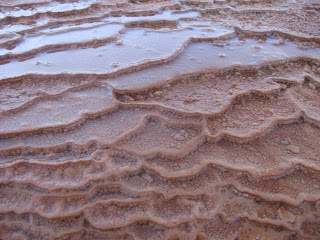 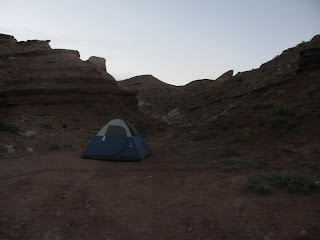 We camped near the geyser in hopes of seeing more of an eruption, but it wasn't meant to be.  I was still under the impression that the Crystal Geyser and the Chaffin Geyser were the same and that another eruption would happen.  Looking back, I realize how lucky we were. 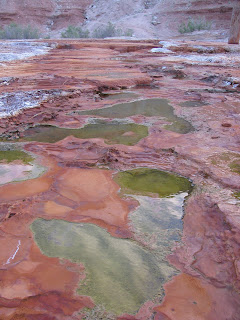 The next morning I woke up first, so I got up and walked around the travertine deposits left from the geyser.  They're impressive enough on their own account.  Even if we hadn't seen the geyser go off, the deposits were really neat. 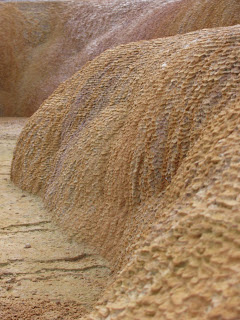 I also walked over and looked down the pipe.  The water level was about 3 feet below ground level and was gently "boiling."  The night before there was water all over the place, but in the morning most of the travertine was dry.  I really enjoyed looking up close at the endless terraces created by mineral deposits.  I noticed that the closer the ones closer to the river were a different width than the ones closer to the geyser. 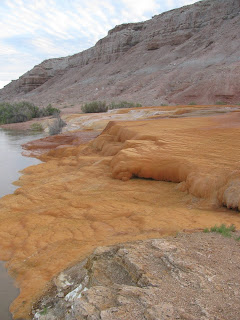 The Crystal Geyser was an amazing stop.  I'd recommend camping there so you can spend some time examining the deposits, looking at the Green River, and hopefully catching an eruption.

Nearest City: Green River, UT
Location: N 38° 56.304 W 110°  08.153
Time Needed: Up to 22 hours
Difficulty: Easy to Moderate, depending on your timing and patience
Kid Friendly: Yes
Additional Info: Directions- Take Exit 164 at Green River.  Turn South.  Turn East at the T-Intersection.  Be sure to take this road more slowly than you are comfortable going, there's some killer potholes that you come up on pretty fast!  Follow the road for about 2.5 miles until it comes to another intersection.  Turn South.  Follow this road to another intersection, where a sign will direct you to the Crystal Geyser.
Posted by Ben at 1:46 PM