All summer we have been thinking that going tubing down the river would be a lot of fun. We decided to go about a month ago, and called around to local stores to find the cheapest tubes. The cheapest we could find was $15.00/tube! This adventure was way more expensive than we had bargained for. So, we decided to postpone until we could find an alternative way to go.

Anyways, a month went by, and we noticed that some people had tubes out on their front porch about a block away. We didn't know them, but Ben decided that he was going to go ask if we could borrow their tubes. So, he went and asked, and here are pictures of us on their tubes lazily cruising down the river. We had a blast! We decided to go back again next year when the water is a little bit higher, so if anyone wants to come along, just come visit around mid-July!

Actually, late June is a better time to go because the flows are a bit higher. We started out at Shields and floated down the river. It was a blast. Just above College, there is a diversion dam, so we got out before then. After you float under 2 foot bridges the water calms down and you know it's time to get out. There is also a rope swing that recieves constant use that you'll pass on the float. It's downstream from Shields a couple hundred yards. 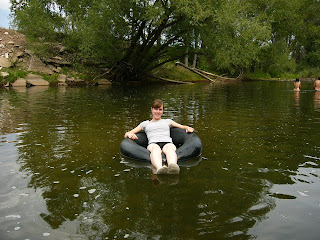 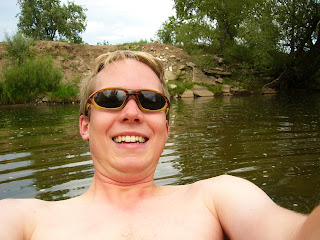 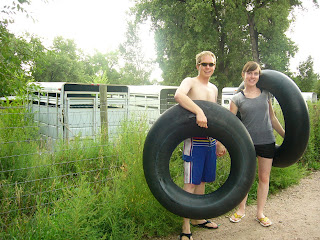